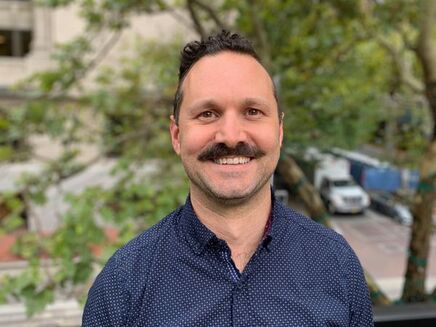 STACY BREWSTER is an author, screenwriter, creative coach, and workshop facilitator. His debut story collection, WHAT WE PICK UP, was released by Buckman Publishing in late 2021.
ORDER "WHAT WE PICK UP"
Stacy’s short fiction, poetry, and reviews have appeared in The Oregonian, Buckman Journal, New South, The Gay & Lesbian Review Worldwide, and The Madison Review, among numerous others. He was awarded the 2019 Oregon Literary Fellowship in Drama for an original queer noir series set in 1940s Los Angeles he is currently adapting for a novel.

Stacy is also the founder of Launch Creative NW, working with clients at all stages of their creative practice, whether to build a sense of permission, hone their craft, or translate these habits into moving their work to a new level. He is available for 1-on-1 coaching as well as editing, proofreading, and research help on individual projects. Email Stacy here or fill out the form on the Launch Creative NW website for a quote.

Since 2008, he has run writing workshops for Write Around Portland, a nonprofit that provides free 10-week writing workshops for those who would otherwise not have access to writing in community with others due to income, disability, or other barriers. Since 2016, he has also been a featured speaker, workshop trainer, event organizer, and curriculum developer with the Northwest Narrative Medicine Collaborative, having led multiple workshops on the intersection of creative practice, queer identity, and disability.

Stacy earned a BFA in film and television production from NYU's Tisch School of the Arts. In addition to prior work in film and TV, he’s worked in advertising, politics, and public service in various production management and communication roles.

Originally from Los Angeles, Stacy lives in Portland, Oregon with his husband, trying not to mind the ghosts in the basement where he writes with a space heater and a small therapy lamp.
​PRESS INQUIRIES OR REVIEWS:
Heather Brown
Mind the Bird Media
719-232-1485
heather@mindthebirdmedia.com